Yesterday I learned how to type Chinese on an English keyboard. The title of this post literally says Shanghai. It’s cool: you switch your keyboard input method, type in the pinyin representation of the word/phrase and the computer translates it into it’s Chinese symbols.

I can now type all sorts of things that I probably can’t pronounce properly. Kevin gave me a book of Chinese everyday slang & swear words. I’ll now proceed to fill my brain with 废话！ You may want to take this moment to check out Google Translate to know what 放屁 I might be saying about you. Kevin gave me a book of Chinese slang & swear words written for the everyday person in China. This can’t possibly end badly.

I’m going back to Chicago on Saturday. The move over here seems like a long time away (two months) but I know it’ll fly right by. Much change ahead.

I suppose I should show you where I am at. Here’s a map of Shanghai with the office & hotel pinpointed on it. Zoom out. You have to zoom out quite far to see anywhere else in the world I’ve previously been.

View Shanghai in a larger map

Thursday was a fun day. I imported Tie Thursday to Shanghai last week by showing up to work in a tie. The team here loved it and had a good laugh. At which point I announced that Thursday March 24th was to be the first International Tie Thursday. The entire team came to work with a tie on! The only one lacking was Tom who is over from the London office and I hadn’t told to prepare for the event. Kevin came prepared and loaned him a tie :) We ended up with ten people in Shanghai, three in London and two in Chicago wearing ties on the same day. It was great.

We took a rather nice picture of the whole Chinese IT team: 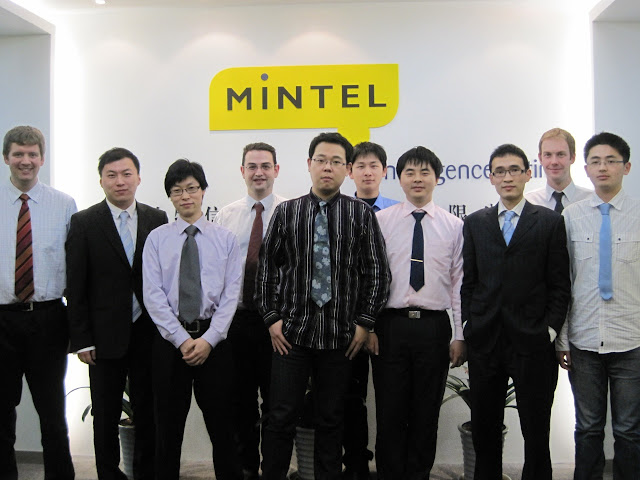 Things here are wrapping up to go back to Chicago. I’m tired. Keep staying up ’till 2AM talking to people in Chicago. I’ve also run about five miles this week in prep for the Oak Park Runner’s Club 5k which is just a week away. I think I’m in shape to run 5k…